In this second ‘Discord’ game a Teutonic army was pitted against a WOTR Yorkist army. Both armies had 3 generals, 15 units and a total of 200 points. We let the dice decide that Tony would take generalship of the Teutonics (white), and Tim the Yorkist (blue). 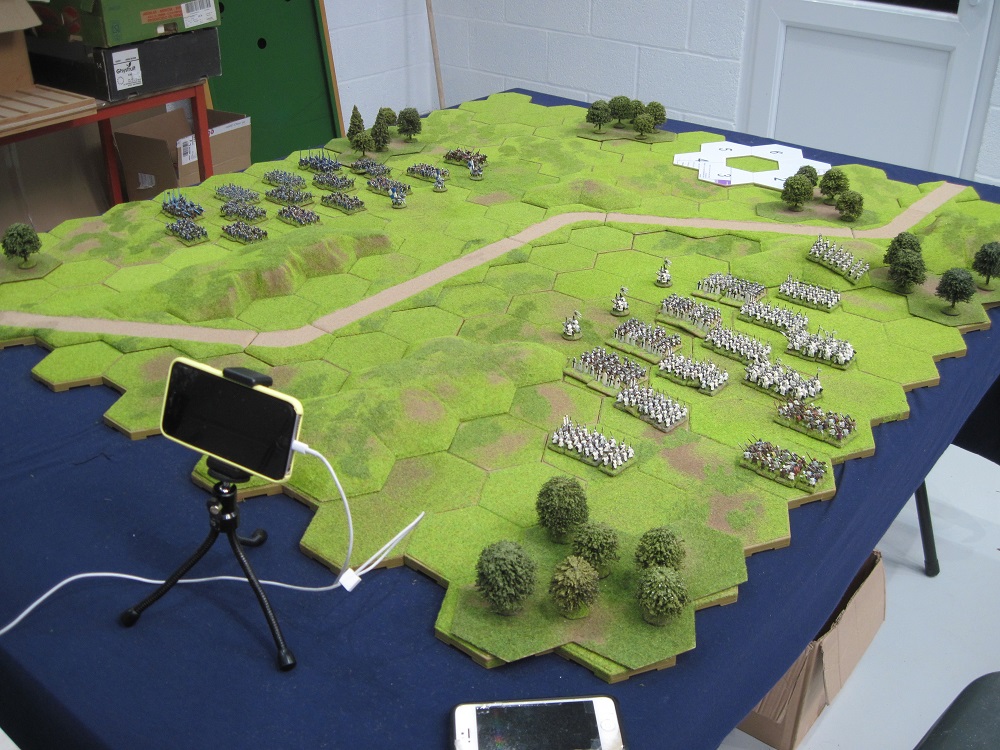 The terrain was open in the centre with an 8 hex escarpment, 8 hex hill, scattering of small woods and a road cutting diagonally across one side of the battlefield. Tim’s Yorkists deployed and advanced to pin his right wing on the 8 hex escarpment while advancing his left wing units which composed primarily of longbow units along the road across the centre line of the table into Tony’s side of the Table. Tony, in response moved his Teutonic spearmen to face the longbow on his right and move his crossbow forward in the centre with his Teutonic knights following-up behind as the ever present threat in the centre. 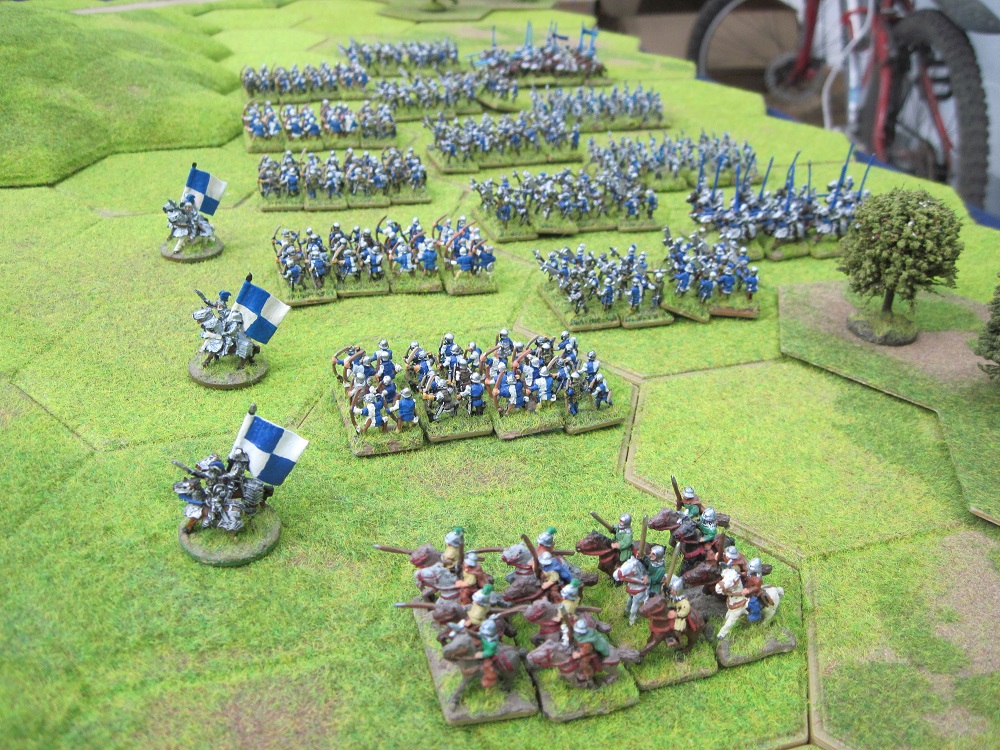 The escarpment was defended by a unit of Yorkist billmen and dismounted men-at-arms. This presented a real headache for Tony and he decided to prepare an assault on this physical obstacles using 2 units of militia and a unit of Teutonic spearmen. 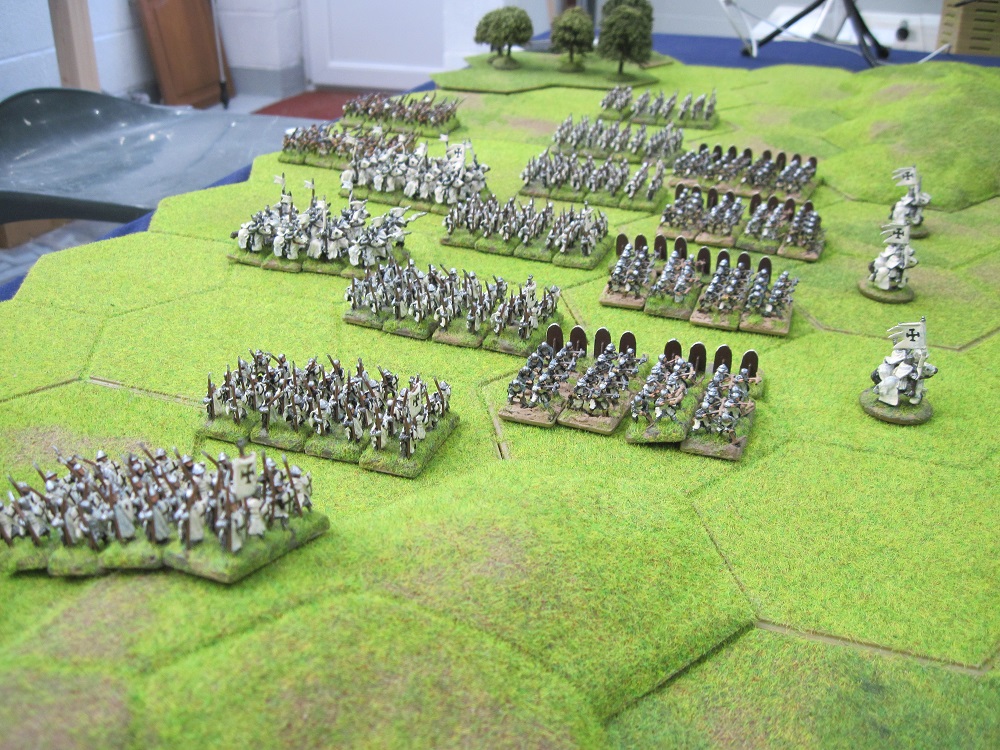 As the two armies closed on each other Tim started to pull his units back in the centre. This over the course of a couple of game turns created a sweeping crescent with its points hinged on the 8 hex escarpment at one end and a 4 hex wood on the other. Tim held his position and awaited Tony’s assault which started with his militia and spearmen climbing the escarpment. This heralded a general Teutonic advance in the following game turn in both the centre and right. 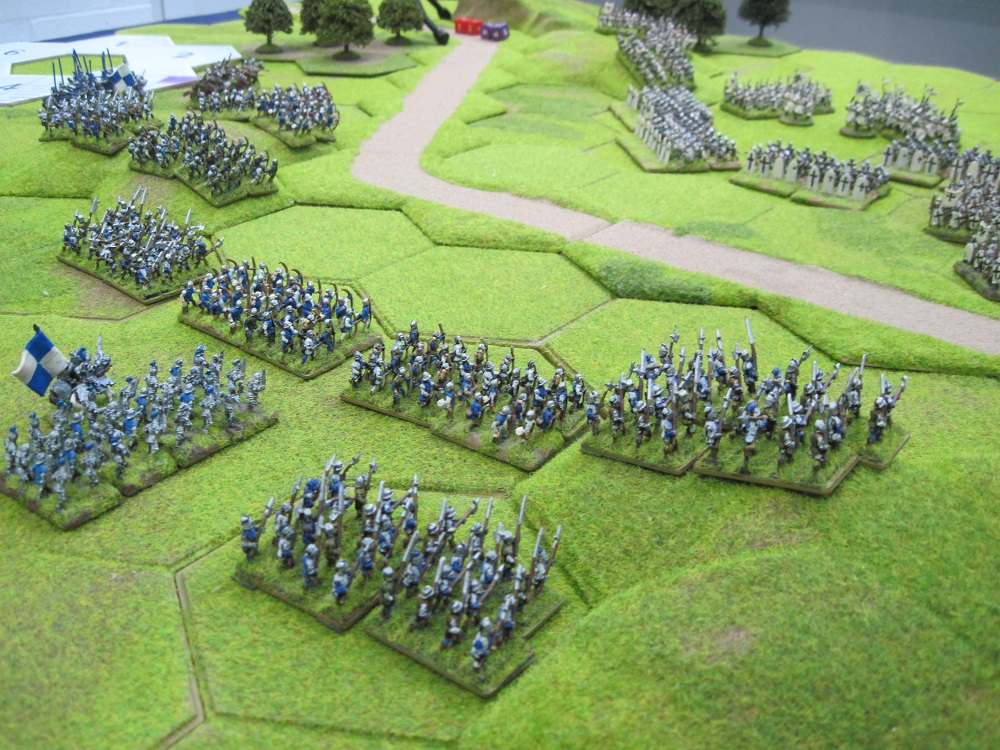 Tony had located 2 of his 3 generals with units of Teutonic knights in the centre. The steam roller was ready to roll but before it did so the spearmen attacked first in the centre. Accurate shooting from Tim’s longbow units on the central 4 hex hill blunted this first assault sending them backwards. Tim’s longbow defending the road and wood on his extreme left also held back the assaulting Teutonic spearmen. 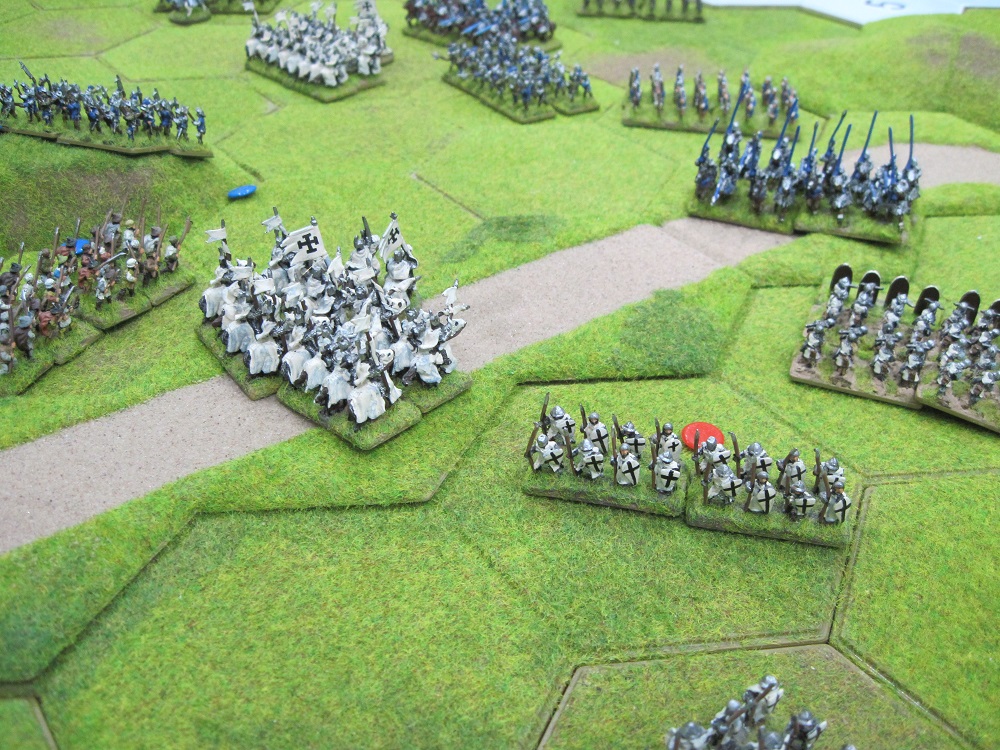 With the attack stalled, Tony went for the ‘nuclear’ option charging his Teutonic knight each hosting a general into the centre of the Yorkist line. They easily smashed a hole through the Yorkist centre and this could have delivered an early victory to the Teutonic’s. However, in the same combat phase the Yorkist longbow along the road on the left and wood managed to hold against the continued assault by the spearmen. But even more significantly, Tim’s billmen defeated the militia and spearmen fighting for control of the escarpment. The result was that the onslaught of the Teutonic knights had taken them into the Yorkist centre where they could be attacked from both wings. 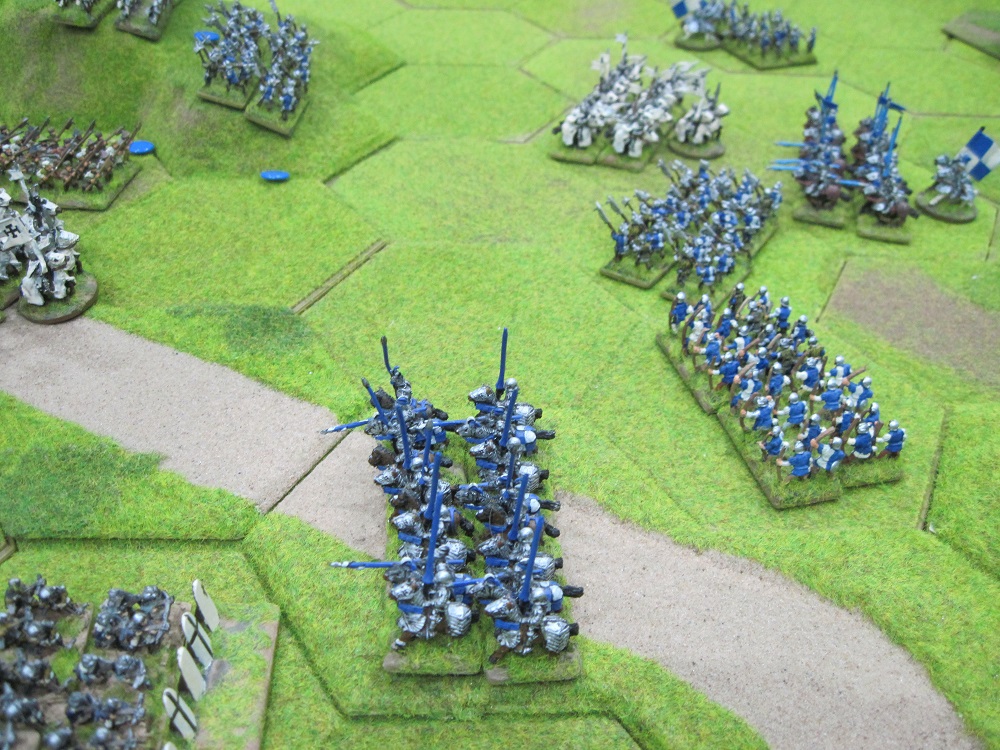 Tim sacrificed a unit of hobilars against a unit of knights to pin them in position so that he could buy enough time to gather units to surround these troublesome organic bulldozers! The victorious Yorkist units descended from the escarpment to join the fight and a general held back in reserve went to assist in the combat. With Tony’s 3rd general already disrupted and being assailed by a unit of Yorkist mounted men-at-arms, the Teutonic command and control problems prevented any rescue attempt coming to the aid of the now trapped knights and accompanying generals. 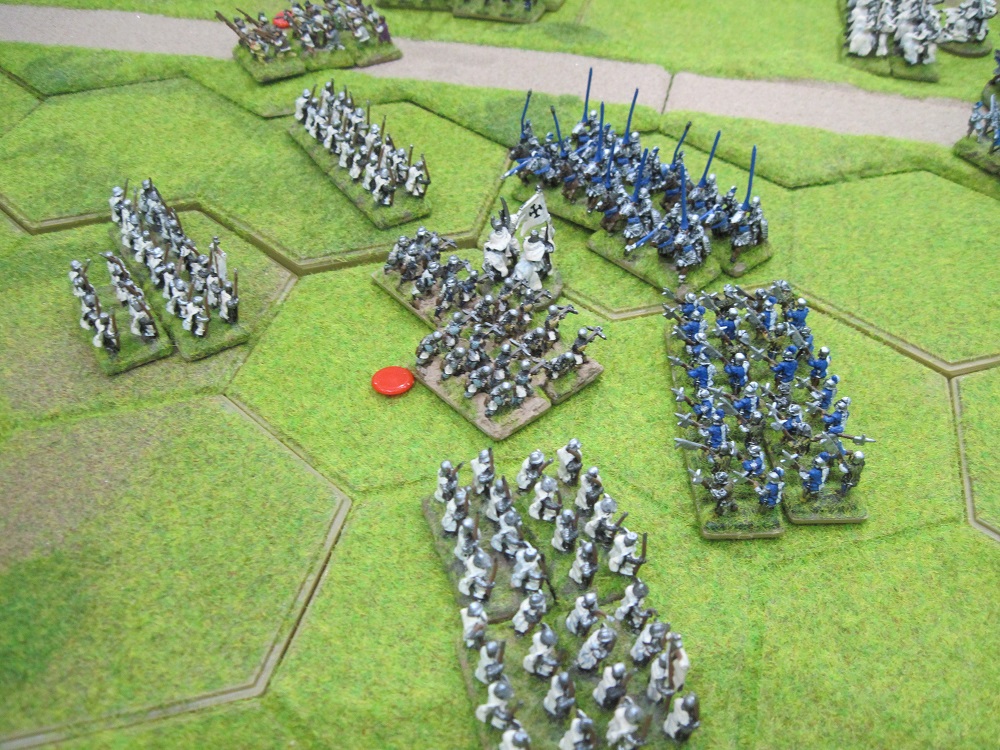 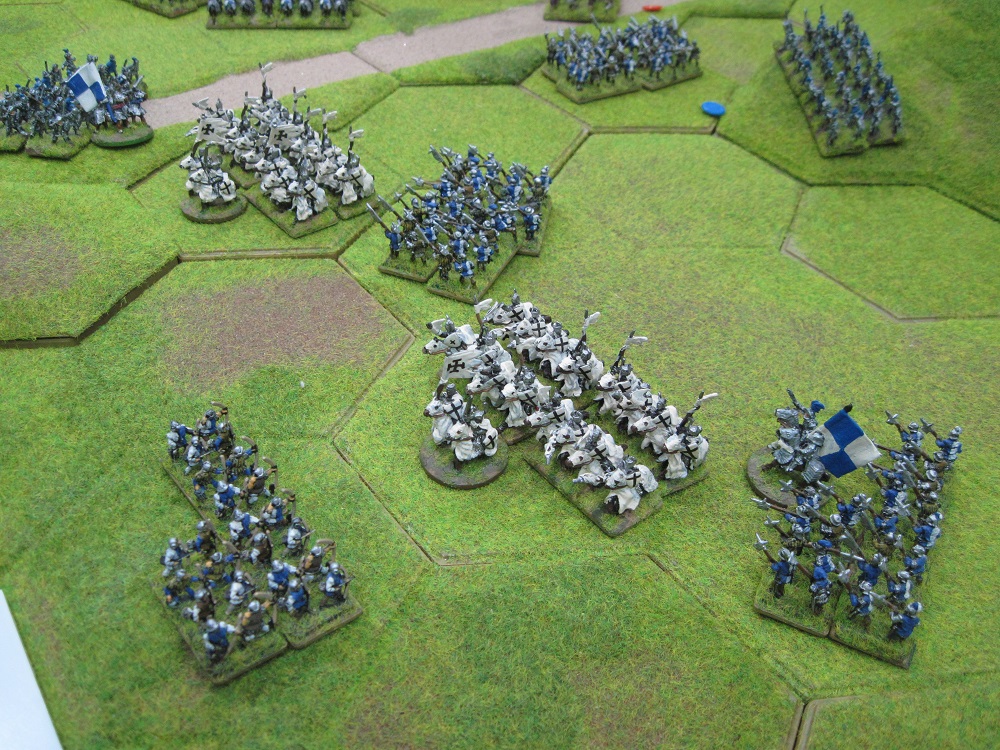 The next round of combat saw the loss of both units of Teutonic knights and generals and the remaining general still disrupted and his fate already sealed. The game was therefore concluded rather quickly with only the Teutonic spearmen still engaged in combat but without any command left on the table. The Yorkist win was certainly down to the fact that the Teutonic knights and generals found themselves trapped in a salient. Also Tim’s Yorkists delivered good shooting and combat wins at key points throughout the game. His decisions to sacrifice his hobilars when he did and also hold back a general to be committed where he was most needed to tip the balance proved decisive.
Kind regards
Paul